Besides asking how and why America’s elected representatives would agree to a measure in direct opposition to the overwhelming majority of citizens’ demand of never again bailing out too-big-to-fail banks, another question which comes up is “what other private sector companies have secured ‘help’ from taxpayers when their businesses fail?” Perhaps men or women reading this run their own businesses. Even without the ability to take gigantic derivatives risks – or engage in massive financial frauds, certainly people who “play by the rules” when managing their companies have no taxpayer bailouts lined up for them when any combination of conditions greatly harms their firms.

And with the five largest banks holding $280 trillion in derivatives (bets), the “Citigroup Provision” could lead to world record-type “helping” from Americans to Wall Street gamblers. There could be no clearer example of how the United States financial system – along with those of nations in the G20 group who’ve agreed to similar “bail-in” plans – is correctly perceived as “rigged”. Most Americans want to see the Supreme Court decision on Citizens United overturned through a constitutional amendment, surely a worthy cause if ever there were one – removing money out of politics and elections, never again allowing billionaires to literally “buy” lawmaking power in campaigns all across America.

If – when – Americans become successful in the 50 states to overturn Citizens United, besides a constitutional amendment taking money out of political campaigns another amendment could read “Taxpayer money shall not under any condition become appropriated and/or transferred to any privately owned corporation or entity”.  When the inevitable Constitutional Convention comes close to reality, the number of legitimate corrections which have become necessary over the decades will be found significant and the topics of a great many, long overdue debates.

Public banking expert Ellen Brown talks to James Corbett about new G20 rules, where Cyprus-style “bail-ins” could hit ordinary depositors and pensioners very hard. Ms. Brown has spent years talking to people around America and the world about the advantages of creating public banks like the state-owned Bank of North Dakota, the most obvious advantage with respect to “rigged” protection for Wall Street high rollers in the multi-trillion dollar derivatives market being providing a safe, gambling-less place for government, pension, and private depositor money.

Ellen Brown responds to those who think public banks are not feasible or possible to set up that any government institution from city, county to state could start a public bank in a couple of months time. The interest and movement toward public banking is growing and, according to Ms. Brown: “it’s only a matter of political will”. So, will Americans settle for privately owned bank corporations, whose charters demand profit maximization, to continue running all things financial in the 50 states?

Or will Americans in every state take strong actions which embrace self-determination and sovereignty, with the supreme goal of returning the power to control the nation’s monetary affairs to the people, in the form of a public central bank to replace the Federal Reserve created in 1913?

To get involved, please visit http://publicbankinginstitute.org 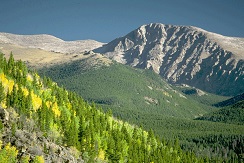 ew Mexico is one more state in America where political leaders and citizens have begun looking seriously at the economic benefits of establishing state-owned public banks. The most basic advantage for communities and states is keeping much more of their financial resources instead of transferring significant funds to profits-driven, gambling-addicted, so-called “too big to fail/prosecute” Wall Street giants.

At the end of September 2014 hundreds of citizens, politicians and public banking advocates gathered in Santa Fe, New Mexico for a “Public Banking Symposium”, and entered into discussions centered on changing the financial landscape in the state. The Mayor of Santa Fé, Javier Gonzales, attended and spoke briefly. New Mexico state representative Brian Egolf was one of the organizers of the event, and spoke about how his colleagues in the state legislature had little knowledge on the concept of public banking when he first brought it up with them, and that their reactions were similar to people who hear a new idea/proposal then first conceive of it as impracticable or “pie in the sky”.

An older public banking citizen activist by the name of Craig Barnes delivered a thoughtful, insightful address that was one of more excellent philosophical explanations of the good reasons communities and state should consider the – as Ellen Brown coined it as the title of her book – “Public Bank Solution”.  Mr. Barnes pointed out the deep contrast between historical city, county and state finance which sees large amounts of capital leaving states and regions, essentially “vacuumed” toward international banking cartels enabled by Washington, Wall Street lobby-procured politicians, and public banking, where those funds stay “at home”.

Mr. Barnes told the audience that “We are here to get off of our knees and stand up”. Apparently, a lot of Americans feel the same way as New Mexico’s Craig Barnes, and have taken action resulting in 20 or so state legislatures across the country considering and talking about creating public banks. President and founder of the Public Banking Institute Ellen Brown gave the keynote address at the end of the symposium, where she mentioned to the audience that the world’s largest depository bank is found in Japan, and that it is state-owned – a national public bank.

Public banking systems, the movement toward establishing them across America, and widespread discussions on the tremendous benefits to local, state, regional or national (the Federal Reserve system is privately owned) communities have very little connection to ideological or political stances (public banking is incorrectly perceived as socialism) but have timely, extremely relevant connection to the idea of small to large communities of citizens’ sovereignty, or independence.

The following video comes from the New Mexico discussion on public banking. Lest people miss the global aspect of sovereign, public banking systems and how the choices of nations/people on their financial organization have highly significant consequences, one need look no further than the recent historic announcement by the international association called the BRICS nations (Brazil, Russia, India, China, South Africa and others) of a new development bank which will “compete” with the International Monetary Fund (IMF), World Bank (WB) and other major institutions.

The BRICS development bank announcement was a profoundly historic event which has created a new, never-before-seen set of conditions on Earth. Whereas before the governments of the world had no other option when faced with the need to obtain multi-billion dollar development loans but the IMF, WB and similar global banking institutions – and because of the highly negative societal results coming from many of those transactions through recent decades, especially massive, impossible-to-repay debt incurred by so-called third world countries – there is now another option.

A simple analogy is where there has been one bank to serve a county – a monopoly, no-competition situation – for what seems like forever, then a new competitor bank sets up operations and begins to compete for the county’s customers. Considering the astonishing fact not one bank executive went to jail (not one was prosecuted) after the economic crisis of 2007/8 even though most serious observers agree that massive, systemic fraud occurred – and combining that with the perceived-by-most, absolutely out-of-balance influence exerted by America’s wealthiest on members of Congress – one can envision the level of opposition to proposals for public banking initiatives going forward.

Of utmost importance with regard to analyzing global conditions is envisioning the true extent of the extreme dangers of major escalation in violence when the scale of opposition cannot possibly be larger: international, formerly competition-less banking institution major stockholders/owners opposed to BRICS. Returning to the simple county bank analogy, let us assume that the monopolistic bank had taken advantage of its competition-less position and that their reputation had suffered severely because everyone living in the county heard many “horror” stories from their neighbors.

The international banking cartel has become placed in a very difficult competitive position due to degradation of their reputation after “horror stories” told by leaders of nations (customers) to each other over time became widely known. BRICS offers those customers another option; people around the Earth must become extremely vigilant to prevent unwise, violent, harmful reaction from occurring in what can reasonably be described as perhaps emergence of the greatest high-stakes wealth competition in world history.

Assuming that those who hold tremendous financial power think deeply and choose to refrain from taking the horribly unwise, immeasurably tragic option of war and killing to “win”, humanity will experience encouragement and an increase of belief in the real chance of cooperatively creating a new, more equal, peaceful and moral world for this and future generations.

When Americans in the Occupy movement marched with signs reading “We Are The 99%”, likely none of those men and women imagined that only a few short years later their message would have traveled and become loudly heard around the Earth.

Please share the following website with friends, relatives, and elected officials in your region. For more information please visit: