Abacca Anjain-Maddison of the Marshall Islands—a place that has experienced the consequences of nuclear weapons first-hand—spoke on behalf of ICAN at the conclusion of this historic conference:

Setsuko Thurlow said at the beginning of these negotiations that the ban treaty would “change the world.” With the successful conclusion of the negotiations, we now have a powerful new legal, moral, and political tool to do just that. We will have to maintain the partnership of states, international organizations, and civil society that has brought us this far in order to use the tool we’ve created for its intended purpose.

Nuclear weapons have been banned. All that’s left now is to eliminate them once and for all. 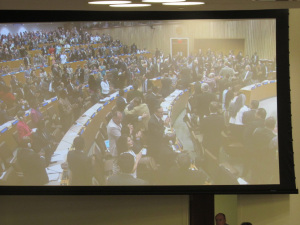 Nuclear weapons have been banned.

Stigmatized and prohibited. That means we’re two-thirds of the way to fulfilling the Humanitarian Pledge, which feels like it was launched only yesterday.

It took three international conferences, two open-ended working groups, medical and scientific evidence accumulated over some 50 or more years, decades of selfless appeals by the Hibakusha and by the victims of nuclear testing, a core group of states with the courage to take effective leadership, a decisive UN resolution, four weeks of honest, good faith negotiating by people who really and truly want to rid the world of nuclear weapons, and seven years of intensive campaigning by ICAN…

…and nuclear weapons have been banned.