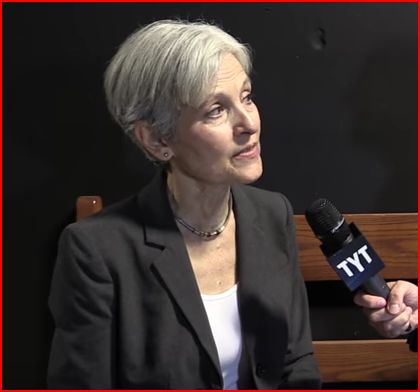 he “Republicrat”-owned, fraudulent, exclusionary, corporate-chartered Committee for Presidential Debates (CPD) has decided Green Party and Libertarian Party candidates Dr. Jill Stein and Gary Johnson are, according to CPD, “not eligible” to participate in the 1st debate on Monday September 26 at Hofstra University in Long Island, New York. In the once every 4-years “Super Bowl of Politics” called the presidential debates… “this Bud’s for you”.

Despite both having the potential for winning the election (the electoral college) and 76% of Americans wanting more candidate voices on the debates, CPD rules say debate participants must have achieved 15% in select popular polls to qualify. Many believe the 15% rule came into force after Minnesota’s Governor Jesse Ventura went from 10% in the polls, appeared on televised debates, then won the state’s (“Land of 10,000 Lakes” – Minnesota) governorship election with 37% of the voters.

With only Hillary Clinton and Donald Trump on stage before millions of American voters, will the two even touch upon, much less debate, “The War Industry” – in particular the selling of billions of dollars worth of weapons to the Kingdom of Saudi Arabia? Answering that question might depend on whether CNN’s Wolf Blitzer is one of the debate’s moderators…

See, in the following interview of Senator Rand Paul of Kentucky, Blitzer seems to imply that jobs for Americans working at defense corporations – the “Military Industrial Complex” President Dwight Eisenhower so famously warned about in his farewell address – might have a higher priority than lives lost or destroyed through illegal wars conducted by using those weapons. Will Hillary Clinton and Donald Trump become asked about, then actually debate, this massively important issue?

Without being able to predict Gary Johnson’s debate performance were he to appear, one has the feeling that Dr, Jill Stein might make certain “The War Industry” gets inserted, in a big way, into the discussions. With the current worrying situation in Syria after American-led air forces bombed and killed over eighty Syrian soldiers while injuring hundreds more – and as Saudi Arabia continues bombing the people of Yemen back to the stone age – perhaps the presidential candidates, all four remaining/seeking possibly the most powerful executive position on Earth… might want to have “a little talk”… A very serious talk.

(Thank you to Jill Stein for President Booster Club at YouTube)

Dr. Jill Stein and her running mate Ajamu Baraka will travel to Hofstra University in Long Island, New York on Monday September 26, 2016. The rumor going around says they will become joined by hundreds of men and women of all ages and backgrounds, and who also have something to say about American democracy… about presidential debates. Will Hillary Clinton and Donald Trump change their minds and engage in debate with Dr. Jill Stein and Gary Johnson next Monday at Hofstra University?

At least for debate #1, the chances don’t look good. The chances are about as good as Clinton and Trump being asked for their respective serious, detailed plans for bringing about peace on Earth – then both are actually seen/heard while fully describing those plans. Now, that would have been (could have been – with Stein and Johnson on stage) one very memorable debate…

2 thoughts on “The War Industry Debate.”